Posted by David Cushman at 1:24 pm No comments:

How Responsive Organisations build the future they intend

My thanks to the community and organisers of Transcending The Crisis for allowing me the opportunity to discuss Responsive Organisation, Context Shocks and Responsive People.
30 Minutes I really enjoyed - and I hope you can find time to, too.

Thank you in particular to Mark Buchan and Si Alhir.

Posted by David Cushman at 11:41 am No comments:

It never was all about the economy -stupid

Context Shocks - as Covid19 demonstrates time and again - reveal trends that the system was already aligned to generate.
We have seen it in distributed working, reimagining of the city, targeted education etc.
Another very significant one reveals itself in the level of state intervention required when markets fail in their primary task - to allocate resources vs human need.
This is an interesting challenge to the western political hegemony - in which the tendency is toward 'In The Market We Trust'. It has seemed there is no problem the market couldn't handle.
But rather like a Prime Minister 'taking personal control' of any and everything that appears to be going off the rails, it turns out - somewhat ironically, that the market only has a limited amount of political capital to spend. And it is all spent out.
The massive scale of state intervention around the world (another £100bn of quantitative easing announced in the UK yesterday) reveals a trend to truth - that the role of The economy is subservient to the Government, not the other way around.
The capacity and necessity of massive state involvement illustrates this truth.
And this trend to truth reveals another, just as important. The state intervention is to meet the needs of people. Given our perilously constrained resources - it is also to meet the needs of the planet. There's no people, government or economy without the planet. 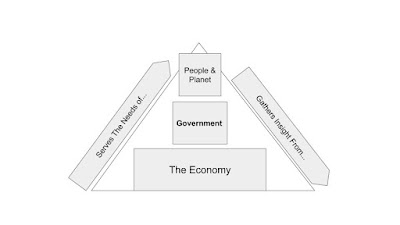 With this we do at least have a simple way of describing the systems goals. Feedback loops flowing between people and planet, between Government and Economy and all combinations thereof will need to be understood and managed in order to steward the right outcomes.
But at least we can establish some clarity about who and what the outcomes are intended to benefit.
It never was about all about the economy - stupid.

Posted by David Cushman at 10:03 am No comments:

Are you ready to play your part as we Build Back Better?

Join me for a unique event tailored to helping Social Impact businesses recover, stronger and more able to fulfil their visions of a new better.

Recover: Equipping Social Impact Businesses To Build Back Better is on July 3. It's entirely pro bono. Tickets cost what ever you can afford to give to the UNHCR Urgent Appeal For Refugees - COVID19.

And I'll be sharing my approach to #Planet Experience

Follow this link to watch videos from the event: https://2y3x.com/videos/july-social-impact-event-recordings/
Posted by David Cushman at 9:29 am No comments:

Let's talk about the Responsive Organisation


I'm going to be talking in more detail about The Responsive Organisation, benefiting from Context Shock and how we can become Responsive People, at The Future of Work 2020 on June 25.
Registration is open:
Registration link: https://us02web.zoom.us/webinar/register/WN_1HwKO81IT5ORyj0JY2yrHQ