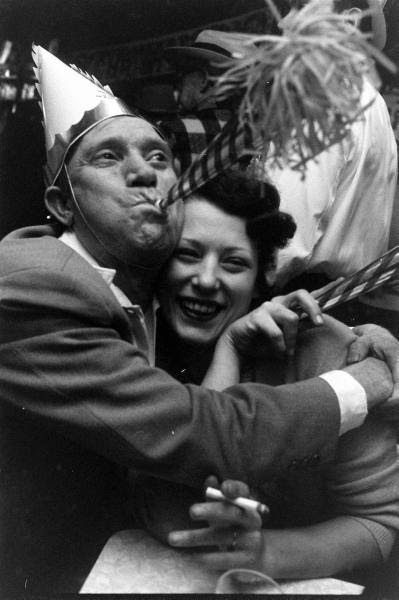 I know. I'm meant to review the last decade or predict what'll happen in the next year around this time.

Thing is, I'm not going to follow the rules, because for the years following 2009 it simply wouldn't be appropriate to follow rules which may have applied up to this point.

We're in for a big change: Where the noughties were a decade of discovery, the teens will be a decade of realisation. And not discovery of new tech. The future isn't digital; it is self-organised.

The noughties were when we discovered our self-organising power - little by little. And new models started to emerge.

But we are embarking on 10 years in which people all over the globe will realise the self-organising power now at their fingertips - and start turning that realisation into the world they want; niche by niche.

Which means everything you know is up for grabs. Everything.

Everything that is organised or mediated can and will be disrupted by this.

That's pretty much every aspect of society, then. (image courtesy Life Archive on google)

As the realisation dawns, you can be certain no one will be talking about 'social media' anymore. They will just get on with using the best ever set of tools and platforms to communicate: With each other, find each other, form groups, act.

They won't wait to be directed. They will simply come together and debug their world. Niche by niche. The edge in action.

It's not just traditional media, advertising, marketing etc that's going to be replaced. Even the 'new media' stuff that relies on central organisation is threatened. Traditional search (for example) is already being replaced for many by collaborative filtering.

Ubiquitous, always-on computing will arrive as the enabler. Digital social tools which allow us to express meta data beyond silos (including language) will emerge to enable all of us to find all of us when we need each other most. Those tools and platforms which fulfil those roles most successfully will be those with the best chance of commercial success.

And by 2020 we will have the tech and the will to make communities of purpose the primary form of organisation: adhoc self-forming groups brought together to collaborate - driven by common purpose.

The self-organised future will begin taking shape, new structures for education, law, government - all the aparatus of the state - will emerge. And as they do the state itself, as a formalised centrally-controlled collective based on geography, will submerge.

This new form of organisation will over-ride more traditional methods primarily because it provides a more effective tool for the allocation of increasingly scarce resources. But also because people like doing stuff together. It's a better fit with the reality of our social selves.

Lowest common denominator models will disappear wherever communities of purpose can self-organise (which is pretty much everywhere and anytime).

One example? Mass party politics will decline. New democracy will formulate in open systems - with collaboration delivering a better fit, niche by niche,

In repeatedly failing to understand the cross-border collaboration of 'their' people, our national leaders remind us of the failure of lowest common denominator politics and broad and assumed national interests.

The issue of global warming may prove a key catalyst. We gave our leaders the chance to sort things out with their big, broad, one-size fits all policies (they found that none did).

In a decade of realisation we move beyond being passive consumers in all aspects of our lives - government policy included.

We won't sit back and wait for the centre's solution. Instead we quietly and determinedly get on with wikifixing our world - collaborating across borders, ignoring the fictional silos the nation state has imagined and attempted to impose.

The impact of the edge on the centre has the potential to be cataclysmic. If change from without happens faster than change from within, something will tear. Fundamental organisational change is hard to imagine as a gentle process.

Judging when to cede control will be a key skill for leaders of all organisations in the coming years. Protecting the vulnerable, another.

My daughter has just finished her first term of traditional schooling. I have to wonder if she will complete her education (what a curious pre-network phrase...) within a similar lowest-common-denominator structure. And if she doesn't - then how does the morph from old to new happen? With a meeting of a parents collective and nods of assent - or with teachers manning the barricades?

There is much to consider; much I (and we) could strive to predict.

Instead, in the words of BBC Childrens TV long gone (and with more than a nod to Clay Shirky's Gin-swilling tales of newly industrial London), Why Don't You Just Switch Off Your Television Set and Go and Do Something Less Boring Instead? Start inventing the self-organised future - niche by niche - with someone you care about, today.

By 2020 a person's worth will be valued by what they share, not what they keep. That may be the most significant shift of all.

Posted by David Cushman at 6:00 am