It's a bit of a... missed opportunity 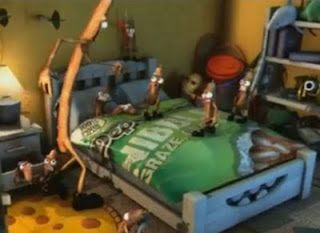 
I'm not knocking the concept. Peperami essentially get 1185 people to pitch them on the hook of a $10,000 prize. No doubt an ad agency would bill them more for the creative time. So on the face of it, it looks like a very efficient solution for the brand.

I'd love to show you the outcome but... er... the video can't be shared from the Brand Republic site it's shown on. Score that how you wish (I'll be scoring that very low, just so we're clear).


Anyway, once again, rather like Nokia's collaborative co-creation of a phone, there is only one outcome here. Only one winner. Only one version of 'good' - and that good judged from just one perspective.


And since we know relevance beats quality every day of the week... it's throwing away a load of the long-tail value being generated.

Peperami should be creating a platform for people to make their own shareable versions of the story, ones which matter to them and their mates - not just coming out with the 'big hit' winner - which is meant to one-size-fits-all suit the lowest common denominator.

Every one of the 1185 entries tells Peperami what people think of its brand. But in isolation only.

The process isn't collaborative. It's silo'd ideas in competition with one another. And that isn't how ideas spread (the intended outcome surely is a spreadable idea as a minimum?). What's missed when you miss out on collaboration is that very critical human element - social influence. What does your idea mean to other people? How would other people reshape it? What do they choose to pass on? What do they choose to adapt?


The problem is that the key outcome of this process is aimed at creating a TV ad. When you start with that as a premise, you're bound to take a very broadcast approach; always an odd match with the networked world the idea is aimed at engaging.

And the networked world would prefer your innovations with the crowd focused on making better products - not just better messages.