Making just one product as a result of a social tech-powered approach to collaborative co-creation kind of misses the point - and out on lots of the value.

It's great for making your product a better fit for the needs of the people you would have use it.
It's great for creating a marketing force for the result - the folk who joined in creating the outcome and who will therefore embrace and champion that outcome to their peers.
It's great for making people feel you are a more open, outward facing, welcoming, brand or organisation.
But if the outcome is just one product, my concern is you've missed out on everything else you've discovered on your journey to making that one product.

For example Nokia's Design By Community project, in which we are all invited to help shape a prototype phone, will end up with just one outcome.

The spec for that one phone is selected by the community each week. From a range of choices, users are invited to vote. And even if (as is likely) there is a long-tail distribution to the spread of votes, only the spec accruing the highest number of votes - the single most popular spec for that week - gets included in the final outcome.

This, like Twitter trends, tells you one thing - what is the single largest grouping.
Yet everything we know about the peer-to-peer network world of the internet tells us that there is greater value in the long tail than in the single largest 'hit'.

So while the single largest group (note, this is very far from the majority in a networked world, while it was very close to the majority in a broadcast one - see 'why hits are worth less in the networked world') may be telling you to make a phone with the largest possible touch screen, 80% or more may be telling you they want something different - be that a small touch screen, a qwerty keyboard, or whatever.

Failing to respond to that, may be missing out on what looks like the smaller prizes, but together, serving global mass niches, they result in the bigger prize. 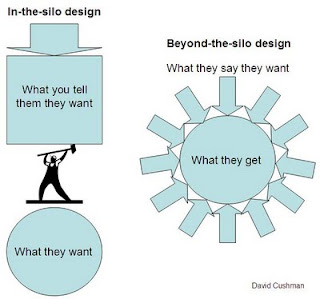 Watch this mistake get played out again and again as old broadcast ideas get applied to the networked world - where people try to use social tools to bring people together - but deploy them against broadcast concepts.

I fear this may be exactly what our new UK government ends up with as it attempts to use technology to bring more of us into the decision-making process. They will surface and serve lowest common denominators; with the resulting disatisfaction for the majority with the single outcome.

Socialising the processes of collaborative innovation and co-creation means more than just using social tools to find people and to distribute to them. It means understanding the greater value lays in the long tail and ensuring this isn't lost in the rush for the single most popular.

Posted by David Cushman at 9:08 pm