Innovators think differently - deal with it 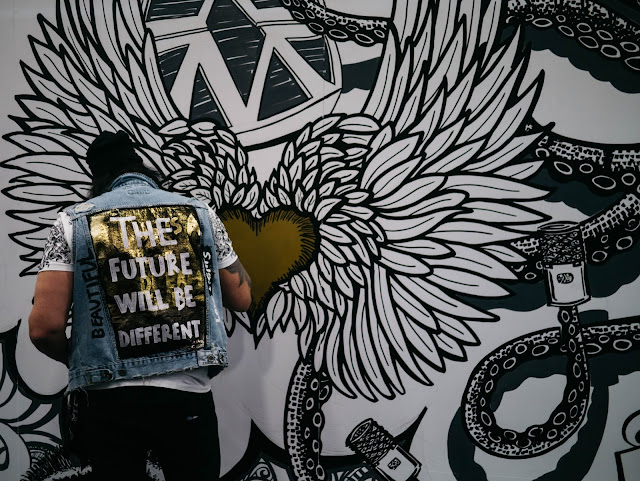 We revel in the navigation of the ambiguous. We are comfortable - almost certain - that the shortest route is rarely the fastest. We think organically, not in straight lines.

We reframe, looking at problems from new angles, we synthesise adjacent scenarios, we turn things on their head and shake them. We go off on tangents, journeys of discovery. Sometimes we have to retrace our steps. Sometimes we make huge leaps.

We thrive in complex and chaotic times - where cause and effect is often unclear.

We have the mindsets and approaches to discover and support emergent and novel practice. This is essential now that the 'best' and 'good practice' of what we thought we knew, no longer helps.

The industrial mindset struggles with this. It wants clarity and certainty. It wants expertise - where there can be none (how can you be expert in the new?).

Design Thinking provides something of an interface between the innovator and the industrialist. It offers the tools to open up the more convergent thinkers, while providing the frameworks to constrain the most butterfly of brains toward the task at hand.

Lean Start-up brings an even harder focus on value and on following the insight - with its introduction of Pivot.

And Agile (at least in its approach to small pieces of work in small teams in rapid sprints of work) offers a way of working beyond the prototype that maintains the focus on insight and end-user value.

I have applied all of the above in varying combinations to product and service design. I have applied them to strategy, too. For years.

The problem for some organisations needing to make their leap right now is that there are still gatekeepers who retain the industrial mindset. It's the mindset that seeks efficiency first. They want the one-pager, the certainty of the business plan, the easy of A follows B. It is how they are used to consuming information. Documents not conversations. Boxes to tick.

And that's a problem - because that's not how the world works and it makes them less able to recognise or trust in the value of the organic, systems thinking, lateral excursions of just the people they need.

The obvious and easy world is gone. It's hard to acknowledge and deal with that change. Humans like easy. Change, learning new things, doing different things - all take much more brain energy and effort. It's much harder to explore than to travel the same route you have a thousand times before.

But Covid19 gave us a Context Shock revealing this trend away from the obvious and easy towards complexity and challenge.This trend - and its inherent demand for the innovation mindset - has been accelerating since the dawn of digital.

It's time to encourage and welcome the explorers.

Photo by Jiroe on Unsplash

Posted by David Cushman at 11:25 am No comments:

When almost every human interaction is a 'meeting' 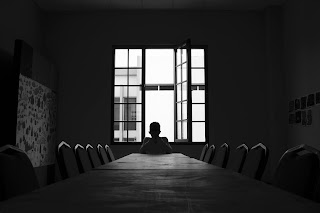 A very smart connection of mine shared his list of rules for effective meetings. They were drawn up pre-Covid19. And I believe there are many circumstances in which they remain 100 per cent valid. You should download them for yourself and use them as appropriate.

But the list of best practices prompted me to think about the pivotal role now held by meetings in the organisational life of distributed teams. Where once they were simply part of the toolbox of human interaction prompts and touch points within an organisation, today, as we seek to maintain connection from our homes, they have become almost the only show in town.

If you have a sudden flash of inspiration, the kind you used to be able to call out to the person sitting by your side, or opposite your desk, now you have to go schedule a zoom/teams etc call. And the protocols of agendas, timing, note taking, action points, co-availability and all the rest may be too high a transaction cost for that idea. So you might just not bother raising it at all.

So in the current context I am wary of suggesting any best practice surrounding meetings.

In working with distributed teams for many years, I have learned that effective meetings start with social connection - the chat bit that we may think is non-productive, but which has huge value for team wellbeing, empathy building and well, caring about each other.

I get that other 'coming togethers' can handle the serendipity and idea sparks we are missing in our current daily interactions but I also think it may be wise to avoid any dogma around what is or isn't the right way to run a meeting when our contexts are changing so rapidly.

This is a time in which best practices will seldom be applicable, in which, instead, novel and emergent practices should be tested in order to shape a way forwards.

What we do know is high performing teams have strong empathy for each other, and enjoy an 'equity of conversation' - ie they all talk for about the same share of time when they are interacting.

Perhaps those are the initial constraints we should try applying to explore what meetings may become?

Photo by Alex McCarthy on Unsplash
Posted by David Cushman at 2:30 pm No comments:

Offices are places to create, not deliver. 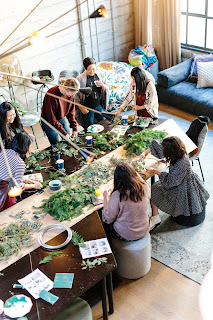 When we established the Collaboratory space at Cognizant - with its inspiring tech access and demos, creative, soft-furnished spaces, multiple screens, writable surfaces everywhere you turned (etc), one side effect was workspace envy.
Colleagues more usually housed in row-upon-row of hot desks (when not on client sites) at the European HQ in London found multiple excuses to use the Think-Create-Make spaces a handful of us called home. They preferred to hold meetings in there, to chat with friends, to get creative.
I recall lobbying global HQ to consider rolling out the Collaboratory concept to become standard practice for all Cognizant office space.
Perhaps, at this time of crisis for the office, it's time to review that possibility?
The threat to the office/opportunity for new and better ways of working came up at last night's, increasingly regular, Beers & Ideas. Contributions came from Rory Yates, Jessica Yates, Pete Ahearn and Dean Corney.
We noted the two-speed nature of the journey 'back to work' - with those who had no choice but to be physically present at work being exposed to the greatest risks. We considered that those who had a choice should consider using it to offer some protection to those who don't.
We noted that home work brought environmental, local community and productivity advantages but that we had yet to understand the impact of our lack of human interaction on creative thought, serendipity and, of course, well-being.
The office is not dead. But it may be about to undergo a metamorphosis of the caterpillar to butterfly variety. We will continue needing spaces to come together, to be together. But those spaces may focus on the needs our social time best serve.
We will need less space for 'bums on seats' placed in dreary rows. Instead we will need spaces to ideate, create concepts, get hands on with prototypes. The office space should transform to one proactively designed for human interaction, prompting and promoting serendipity.
We will visit such spaces to actively spend face-to-face time with other people - rather than check-in, log-on and head-down. We can do the latter so much better at home. But the former - the bits that define what we could and should be heads-down about, that is the role of the office post-Covid19.
It may be a day a week or a week a month. The important realisation is that offices should be places optimised to create - the home can be where we get focused on the work and get the delivery done.
Like so many other trends that this Context Shock has revealed and accelerated - this one has been a long time coming.
Teams are already coping with a great deal of change - much of it sub-optimal. So, rather than watch the office stagger back on to its feet, let's see it leap forward and play its part in the creation of a new and better way of working.

Photo by Hillary Ungson on Unsplash
Posted by David Cushman at 9:28 am No comments:

Posted by David Cushman at 4:39 pm No comments:

Posted by David Cushman at 1:24 pm No comments: