Image via Wikipedia
I have been liberal with my complaints about Apple's poor responsiveness to iPhone issues raised through social media. It seems as if they aren't listening.
I'm pretty sure they must be - they just don't go in for all that messy responding stuff. Shame.
But, that said, when you run out of patience in waiting for a response via social media and take up an issue with the applecare team, it may take a number of calls and emails, a little time and effort, but the guys at the other end of the phone do make you feel like they are on YOUR side. Which is nice.
I won't bore you with how we ended up with Apple agreeing to send me a nice pink shuffle ( I reckon my four-year-old daughter is ready for her first ipod, she certainly thinks she is) and a very fetching Ted Baker leather case for my iphone, but they did - and they have.
And they've followed up to make sure they have arrived.
And now I'm feeling all warm about Apple again - particularly as the shuffle has worked so brilliantly with my pc this evening as I stack it up with High School Musical tracks... (I wish my iphone worked as well with my pc!)

So, thank you apple. But really this is a thank you to a human being, who by their human interactions has given me a new faith in apple. Thank you Sean Granville.

Roughly £70 worth of goods and a quality customer service experience has turned me from someone who may well never have bought another Apple product ever to someone who is likely to carry on cluttering their home with apple prods ad infinitum. Not just me, but now my daughter too.

You cannot place too high a value on human interaction!

Posted by David Cushman at 9:55 pm No comments: Links to this post 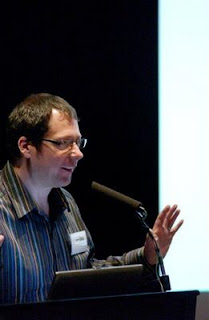 Breathing a sigh of relief after the BrandoSocial 'Winning with Social Media' event at the Soho Hotel in central London this morning.
We've been getting some great feedback via twitter already:

FoluB: Good talk from @davidcushman at the #Brandosocial seminar. He and Alan Moore talked a lot of sense

farhan: just finished a great morning listening to some social media greats including @davidcushman, and co from @brandosocial

badgergravling: @davidcushman Interesting event and will be in touch shortly...
about 1 hour ago from web

tshelton: @davidcushman thanks for letting me come! fun to see your terrific team in action and spreading the word that social media is inevitable

msamayoa: Enjoying a truly inspired state of mind after Brando Social's event! Lots to process and then share. More soon... Me = :D!!!

madejadomuelta: I have attended this morning to the Brando Social event. It was just brilliant. Congratulations!!

All this - and I got to see Mr T from the A-team when we went down to check out to do a technical run-thru the day before :-)

Seriously, big thanks to my fellow speakers Luke Brynley-Jones, Alan Moore, Chris Thorpe and Jamie Burke. And to Dominic Campbell who joined in for the panel at the end. You rocked guys. Find out more about all of them and their services here.

For those who couldn't be there, we're going to add video of the whole thing to the BrandoSocial website in the next couple of days.

Attendees also got a nice glossy copy of our white paper 'What Is Social Media'. You can get a downloadable version free here.

Just for the sake of clarity, BrandoSocial is a full service social media agency where I'm Director of Social Media.

I'm now looking forward to speaking to MA students on the online publishing course at Leicester De Montford Uni tomorrow morning. If any of you have any questions you'd like me to think about in advance, drop me an email?

Apologies for the lack of new content on this here blog in the last couple of weeks.
Nothing sinister - I've just been off on vacation. I'm back, refreshed and newly fascinated by human interaction and connectedness - and how and why we value it.
I spent the best part of two weeks utterly disconnected - and I observed those around me who, for the most part, were taking a similar course: folk on vacation - families spending time with each other.
And I wondered whether the lack of ubiquity when you're away from home/business and the ludicrous data charges is what suppresses our global social nature.
Or is it really something we NEED to take a break from, from time to time?
Or is it more simply that for those of us who are not digital natives, it is tougher for us to keep up the constant connectedness. We didn't grow up with it so we'll always need a little switch-off time?
My gut feeling is the latter. Those I did see around the pools with feet up, shades on and mobile in hand were, for the most part, a little younger than I.
What's your experience. Is disconnection part of your vacation experience - is it an essential part, an enforced part or an accidental one. If I didn't have a four-year-old in tow (and nothing requires more attention than that) would I have turned to social media to fill the time?

Posted by David Cushman at 9:43 am 2 comments: Links to this post

Community, by the community

Here's the slidedeck about community Neil Perkin presented at the IMM Conference this week.
Neil, inspired by Mark Earls, came up with the idea of making it a co-created effort.
A great initiative and one I joined. See if you can spot one of my slides among it.

My slide is, of course, a summary of the communities of purpose idea. Enjoy them all.

A Presentation About Community, By The Community
View more presentations from neilperkin. (tags: crowdsourcing community)

Posted by David Cushman at 11:21 am No comments: Links to this post Here's a neat crowdsourcing play: Idea Bounty shared with me by Scott Gray.

I'm a big advocate for what I describe at BrandoSocial (where I work) as social brief creation: the process of creating the idea for implementation alongside those closest to the thing being produced and alongside those for whom the message is intended.

It should be a process of co-creation with the added benefit of achieving real buy in from clients and receipients (that which we create, we embrace, hey Alan...).

Idea Bounty approaches the creative brief from a slightly different perspective: that of taking the crowdsourcing of input global. (image courtesy)

In its current form it has the potential to reach out to a much wider pool of creative minds than you usually have access to (and they're paid for their efforts, so plenty of incentive).

But it is very much pitched at clients and creatives:


Clients: Get thousands of minds thinking about your brief and only pay for what you use.
Creatives: Get paid for your best ideas with no long term commitment from you.

In other words there's somebody missing from the process of social brief creation - the people the brief is, in its implementation, intended to reach/serve.
It's not a huge step away. And even in its current incarnation Idea Bounty's fulfilment of the idea that none of us is as clever as all of us will make it extremely useful to many.

Mind you, there's many a creative ego that simply won't accept they might not be quite as good as everybody.

Posted by David Cushman at 8:04 am 2 comments: Links to this post I often get asked for a definition of what social media is.

There are those who see the phrase as standing in the way of the true significance of the adhoc group forming nature of the internet (communities of purpose, as I so often refer to them).

Alan Moore asked recently via twitter for a definition those outside the echo chamber might more easily 'get'.

It's a tough call. Many people start off refering to social media as a channel or tool which can be used to target audiences. Avoid.

I usually answer the 'what is social media' question with:

"Any form of peer-to-peer communications which are digitally enabled."

It's my catch-all to cover everything from sms texting, through email, through digg, facebook, twitter, et al.

But what if peer-to-peer isn't a shared term of reference between you and those you are joining in conversation?

Well, rather than the broadcast media's concept of one to many, social media is, as the name implies, more pluralist.

It's many media. (image courtesy)

Many publishers, many advertisers, many marketers, many distributors, many organisers, many producers, serving many, many, many adhoc self-forming niches of relevance (which is why it's a network, a supply web - not a channel or supply chain).

No longer does a small handful control who publishes, who advertises, who markets, who distributes, who organises, who produces. No longer does a handful choose what the many have to accept as relevant (eg the lowest common denominator of mass media and mass production).

Social media is about, for and by all of us. All of the many potential groups of us. And we (and therefore the number of our groups) are many.

At its simplest, social media is where humans talk to each other about any and everything, as humans.

And as we do that, we share information about ourselves. Thanks to the real-time global Power of the Network, we are now better able than ever to find others like us, who care about the same problems we want to solve (right now).

Through our global real-time conversations we find solutions we are prepared to act on to make happen.

Right there is where the value emerges.

BTW: Here's the latest from the #socialmediais tag in twitter.

Posted by David Cushman at 7:55 pm No comments: Links to this post