The professional touch: And other ways to kill your effectiveness 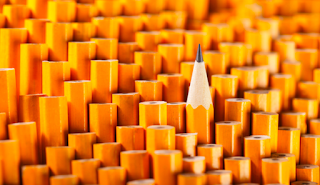 What does being professional mean in a digital world?
Once it was 'professional' to complete and perfect products to the nth degree before releasing them from secrecy. Now it is the norm to release Betas and Alphas to learn from doing, to measure response, to shape to adoption and behaviour.
In the same way professional writing, publications, presentations and thought leadership once served to provide a clear and final view. This was how it was. No argument expected and few tolerated.
Blogging, and other social media changed that - a space was created where ideas were kept alive rather than shot dead to be stuffed and placed on the wall as some kind of trophy.
The digital world requires a different kind of 'professionalism' - one which is less about the refinement of the 'professional touch' and more about using your skills to engage, learn and iterate.
This is a world in which a messy kitchen is more valuable than a neat and tidy professional one. Clay Shirky came up with the analogy in an interview I conducted with him 10 years ago. He argued that people felt less comfortable about joining in if they entered a kitchen in which nothing was out of place. If there was a little bit of mess, we were more likely to pick up a utensil and help out.
There's evidence from the world of dodgy fonts, too. While the professional approach is to use clear fonts with limited amounts of variation in size, emphasis or hue, what actually works is somewhat different.
Studies at Princeton discovered hard to read - or what designers call 'ugly' fonts deliver greater retention of what has been read. If you want to land the message make it ugly, messy and... naturally add some emotion.
Professional detachment is of low value in this last case. Creating memories does not simply rely on the world we experience externally. It is as much about our feelings at the time of experiencing. Let the excitement shine out.


Maya Angelou — 'At the end of the day people won't remember what you said or did, they will remember how you made them feel.'

If we accept that we can scale our effectiveness as professionals when we gain engagement, and in so doing can better land an idea, then what passes for professional communication demands to be reappraised.
Posted by David Cushman at 12:52 pm No comments: Links to this post

Avoiding the holes in your future

"Planning involves conjectures about the future and hypothetical cases. They are so busy with actual cases that they are reluctant to take on theoretical ones."

Henry Kissinger was talking about US Government policy makers when he wrote the above - in his doctoral thesis. The insight is equally valid for businesses today.

When 'planning' what is often conducted is an exercise in reactive tactic making - trying to solve the problems facing you right now, usually in the order they appear to be impacting. It is planning in the rear-view mirror.

The result is a drag on future capability, with resource allocation skewed toward problems that have already happened versus preparation to take advantage of emerging opportunity.

Kissinger advises you must create the time to lift your eyes and look as far ahead as you can see.

Words like 'hypothetical' and 'theoretical' are too often dismissed in the daily challenge of dealing with what's right in front of you (by which we usually mean, what is immediately behind us).

So for those who are still more concerned about their to-do list (let's call it our 'should've already done list'), here's a real-world example from the world of advanced motorcycle riding: The further ahead you look, the faster you can go.

Looking further ahead when riding allows you to:

a) Identify risks, and plan to deal with them
b) Get a long view of the road ahead and plan your best position not just for the first bend you can see, but for a series of twists and turns.

The opposite leads to 'target fixation'. This is a known phenomena beyond motorcycling.

From Wikipedia: Target fixation is an attentional phenomenon observed in humans in which an individual becomes so focused on an observed object (be it a target or hazard) that they inadvertently increase their risk of colliding with the object.

Simply: You End Up Going Where You Look.

If you focus too much on the pothole in front of you, you are more likely to end up riding straight into it.

Look away from the danger and towards your opportunities and you are better able to make a plan to avoid the hole in your future.

Posted by David Cushman at 9:35 am No comments: Links to this post