It's a wonderful challenge to many conventional wisdoms.

Here he tackles why our consistenly irrational behaviour reveals why traditional economic theory is often so wide of the mark.

Really interesting to hear how permission to cheat is granted - and what that means for the stock market.

Posted by David Cushman at 8:26 am 2 comments: Links to this post

In search of a new philosophy

Alan Moore is pitching a proposal for next year's SXSW. If you like the sound of it, vote for it.
His 'No Straight Lines Thinking' approach is a rallying call for a new philosophy more appropriate to the networked world.

Disclosure: Alan is a good friend to me, and someone I have worked with in the past and would gladly work with in the future - a true believer in the power of the network.

The core areas (to investigate) are these:

And there's a video to explain a little more:

Posted by David Cushman at 8:52 am 2 comments: Links to this post

Any form of automated messaging has the potential to be spam. Most of it fulfills that potential extremely well.

For example. At the weekend I was followed by someone on twitter. I got my email alert (a lowest common denominator one from twitter, which the guys are working to make more bespoke through displaying follower counts etc... but still a way to go).

Anyway, the person looked like they were interested in the same things I was. Follower/followed count was pretty even - usually a good sign. The recent tweets looked human and interesting enough.

So I followed back.

And then they let themselves down.

With an automated direct message back to me.

It said something like: "Jeez, I'm just so busy with all these new followers at the moment I can only send you this (poxy - my addition) automated tweet. Sorry and that."

Hang on a minute mate. You followed me! If you're too bloody busy to have a conversation with me don't bother following me. Simple.

Maybe they are hoping that at some point in the future they will have time to have a conversation with me. I'm sure they will.

And that's really the point about lowest common denominator messages. The automated, one press-release-style-email-fits-all approach creates not contact, but resentment.

I said this in the previous post on this blog, but I think it's worth reiterating: When your purpose is to communicate with humans, don't massage the humanity out of your communications.

Automated Direct Messages have no place on twitter as far as I can see. If you get one, you have discovered someone who likely also wants to use you as a channel.

I hereby urge twitter to make a stand on this - and ban automated DM messages.

Perhaps we could start with a #banautodm hashtag. Your suggestions very welcome

Posted by David Cushman at 8:15 am No comments: Links to this post 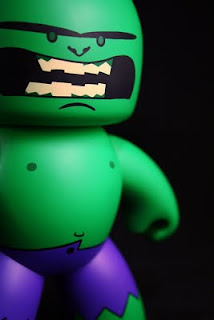 1. Businesses insisting on massaging (messaging?) the humanity out of their best efforts to communicate with humans. There's a kind of insanity in that which is beyond grotesque.
2. The desparation for certainty. The world has always been adhoc, hard to measure and unwilling to yield to your command and control simplicity. Learn to love the opportunity within the cloud of 'vague'.
3. The allure 'mass' still has despite our niche know-how and why. Twitter trends; 'ooh I'm on the tele', 'I've got more friends/followers than you' - you know it doesn't make sense. Just let go.
4. Those who think they can 'use' us (that's me and you, kid) as a channel.
5. Anyone who thinks the conversation is trivial. They belittle what it is to be human and the value we place on relationships. Their loss.

Oh go on then, tell me what you're fed up of.

The NHS: A case of viral love, belief and the enemy 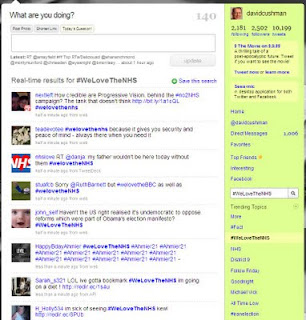 Much time, effort and money is spent on 'making things go viral' - often without making much beyond a ripple on the web's vast ocean.
And that's ok. Really useful things - things that are a really good fit, are a fit for long-tail-like-low numbers by virtue of their true relevance to those who find them useful.

But many a marketing director still dreams of the kind of mass numbers of mass broadcast.
They want their mass cake and eat their niche one too.

The envious eyes hungrily watched the growth of #welovethenhs on Twitter.

They saw it grow so fast it crashed Twitter, attracted Prime Minister Gordon Brown to join in (and his PR savvy wife Sarah) and... finally the mainstream press ran another story about Twitter. Lots.

(By the way, how did the BBC arrive at the claim 'The Twitter campaign has attracted more than a million followers ' - that's not a stat that's publicly available as far as I know.)

An aside on that: This very regular transfer of twittered tales to mainstream media is all a little odd.

1. It seems wise enough of the press to report on how people are talking about stuff. Before social media journalists did vox pops or listened in pubs. We (us people, not them journos) always were the content. But back then we weren't publishers or distributors. Social media allows us to fulfill all three roles now. Which I guess is why the press reporting what we had already thought, published and distributed makes them seem a little like the proverbial spare apendage at a house of ill-repute...

2. Reporting that people are organising to show how much they are prepared to fight to defend the NHS is a huge story politically. Yet the press continues to report on the tools (Twitter) rather than the action. Like I keep saying, we're trying to change the world - not report on it.

Anyway. Back to the matter in hand. Why did #welovethenhs grow so fast and wide?

Here are my best guesses. Feel free to add your own to the comments.

1. It was NOT directed from the centre.
This is no Government-organised PR stunt. As far as I can work out some graduates in Edinburgh started the ball rolling (update: Dan at Twibbon, started the twibbon - which is going wildy well - comment from him below. He also tells me the instigator of the hashtag is Graham Linehan, best known as the writer of Father Ted.

2. It is a belief which people can share, rally to and advocate.

3. It is a belief that was there already. The #welovethenhs became a tool those who shared the belief could use to find one another.

4. It's emotional. So are we. One tweet I saw summed it up. 'everyone has someone in their family who owes their life to the NHS'.

5. Someone threatened the thing we all believe in. Hello Sarah Palin and the American right. Her description of the NHS as evil not only revealed how slippery her grasp on reality must be, it got our backs up - making us more ready to act.

6. The tools were easy to use and perfectly adapted for peer to peer transmission in the wonderfully viral conditions of Twitter. ie twitter's hashtags and trends.

7. Influencers got a simple way of wearing a badge to support the campaign in every conversation they had - the simple but effective twibbon.

Posted by David Cushman at 9:46 am 2 comments: Links to this post

The opposite of a snob is your mother

When I saw JP Rangaswami tweeting he was at the recent TED event, I had to ask, what the stand-out for him was.
This (below), was his answer. Given that TED is a pretty well curated collection of brilliance, that this should stand out for JP means a lot to me. I trust it will bring value to you, too.
Alain de Botton challenges what success means. Watch it and my headline will make sense...

Posted by David Cushman at 4:28 pm No comments: Links to this post

The message is, it's not about the message

Great to see Mark's Herd referenced in this deck (now available as a paperback, btw). You get to it just before the end. Paul's decks are consistently good and bang on the money as far as I'm concerned.

I've long agreed (believed) we must be part of co-creating interesting things for people to do together.

It's not really about the messaging any more (if it ever was?) - that's the message. It's about the doing.
Not to them, with them. With us.

I often say: We're trying to change the world, not report on it. That's not a media thing. It's a people thing.


What's Next In Marketing And Advertising (2009)
View more documents from Paul Isakson.
Via Neil Perkin

Posted by David Cushman at 5:08 pm No comments: Links to this post