Be part of lowering the cost of action - or be history

I've long been baffled by those that think the future is digital. Those who believe this seem fixated on the idea that it is the technology that makes change, rather than what people do with it.
When the technology of the printing press arrived, the end of the story wasn't the development of the book. It was what people did with books that counted - how they spread ideas.
And in the printing press model, the changes to the way society organised echoed the mass production centralised way of doing things that the printing press - and later more forms or mass production - represented.
No, the future now isn't digital, it is self-organised (as I have suggested before). The web's role is to enable adhoc self-forming groups of purpose to form more effectively than at any time in history. And since communities of this kind reduce the cost of action - they cut the cost of achieving what more of us want, more effectively, than at any time past. The future that delivers is emerging and accelerating towards us now.
So what does that mean for the world we know? For your business? For your political party? Your form of government?
Well perhaps it's wise to reflect on what survived from the feudal world to the capitalist one? How many of the richest families in Britain were among the richest in Britain on both sides of the divide? And if there are any that survived, were they among the first to adopt capitalist principles of organisation - of both capital and labour?
What of our God and King? In Feudal times the Church sat alongside the King - in terms of power; and always well ahead in terms of wealth. Both saw their places tumble in the age of capital. Today they are at the peripherary: Pomp and splendour - about as relevant as the role of hand illluminator of Bibles.
God and King were superceded by Parliament (democratic legislatures) and the Law.
The question facing all who would mediate, all who would organise from the centre, all who would impose one size-fits-all-solutions on a fragmented fitness landscape, is: are you prepared to adapt to the looming self-organised future, to survive?
Are you prepared to start listening, start adapting to real time need, start opening up, start thinking like a platform to make change with the people who want the same as you (both inside and outside your org)...

If you aren't, then expect the rest of us to be self-organising to answer the question of what replaces you any day now.

Posted by David Cushman at 6:36 pm 2 comments: Links to this post 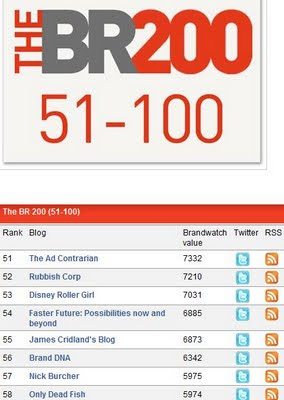 FasterFuture has landed itself a spot in the Brand Republic 200 (#BR200). Please note if you want to take a look at the list in full for yourself you will need to register with Brand Republic. It's free to register - but an inconvenience all the same.
The intention of this particular top 200 is to "list...the best advertising, marketing, media, PR and digital blogs from around the world, ranked in terms of traffic and social influence."
FasterFuture comes in at 54 on this global list.
The methodology:
Brand Republic ranked the blogs by influence using an algorithm that weighted factors including traffic, Mozrank (determined in part by the number of inbound links) Twitter data, and social presence on, for example, Twitter, Facebook and LinkedIn.Where there were multiple authors writing on a single blog, their individual social presence on sites such as Twitter, Facebook and LinkedIn was also considered.

An interesting conversation emerged on Twitter last night. It hasn't ended yet I suspect, but I wanted to capture a snapshot of it to share.
The conversation is all about twitter and other technologies and how these may or may not enable us to push up the Dunbar number. Those involved include the 5th Beatle of the Cluetrain JP Rangaswami (Jobsworth). author of Herd, Mark Earls (Herdmeister), uber blogger and techy Kevin Marks, Tech journalist (at the Guardian) Jack Schofield, musician, blogger and coder Jack Stow, knitting nomad @Carocat - and a bit of me.
It's one of twitter's weaknesses that valuable conversations can be difficult both to follow and to archive when multiple parties are involved - yet this is exactly when it is of it's greatest value: bringing people together around things they all care about: An adhoc fuzzy-edged community of purpose rather than a silo of friends.
Here's the snapshot. Go follow any of the folk involved to join in.

Posted by David Cushman at 10:13 am 7 comments: Links to this post

We all love a list... when we're near the top. And this one has 'me' at Number 3. 'PR Week Power Players of Social Media' is curated by @andismit, of PR outfit Escherman.
The 'PR Week' referred to in the title of this Peer Index listing is a UK publication for the PR industry. The listing was based on one originally compiled by PR Week and has since been augmented by Andrew (@andismit)
Here's how the scores are calculated.
Usual thanks are due of course to the network I am part of - everyone I interact with, everyone who responds to my posts, tweets with me, gives me the time of day... that's what gets an individual climbing a list like this.
I am merely one representative node of the success of the network we share. So well done all of us. Thank you.
To see the latest live listing of this particular peer index visit http://www.peerindex.net/andismit/group/pr_week_power_players_of_social_media

Posted by David Cushman at 8:30 am 2 comments: Links to this post

Video: Understanding media in the context of social

The Media Briefing was kind enough to conduct a video interview with me last week.

The questions (and answers, I hope) are aimed at helping media companies understand the impact of digital/social, the value of purpose in a platform-thinking world and the value of open vs closed (paywalls et al).
Here's the edited results. To see the video in the context of the original article follow this link.

Posted by David Cushman at 8:32 am No comments: Links to this post