What is happening to my internet?

We can Haz your Internets?So while Facebook busies itself remaking the internet in the way Governments would have liked it, Google (in Google+ ) comes up with a social answer of the kind McKinsey would have arrived at had it done the math (Nova Spivak said that first, not me - so good I had to repeat it).

To be fair, Google hasn't graced me with an invite to trial Google + yet (update: theyvdid about an hour after I published this). I do worry though about all the 'friend-management' that is being referenced in news reports about it.(I'll feed back in due course).

Which makes me ask: What is happening to my internet? To your internet? To the wonderful adhoc, fuzzy-edged, self forming internet?

Why do folk keep trying to put it in a box and make it behave like it were part of the old broadcast world, of mass, of control and ownership at the centre, of take not give.

I was only half joking when I tweeted (when stories about Facebook's IPO) broke that we should all leave for a bit of a laugh - and then see how much it got valued at.

Control and ownership from the centre.

The internet The Government would have given us had we asked.

But we didn't ask did we? We just did. One task at a time. Flocking. Failing, Flailing.

Don't tell me it's time the internet grew up. It's time we removed the silos and gave it back the freedom from which it flourished.

Social networks of the Facebook kind have delivered a wonderful thing - they gave everyone and their mother access to the group-forming value of the web. Once learned though, do we still need the stabilisers on?

Don't forget folks, blogs remain the single least silo'd bit of easy-user tech available to most of us through which to self form groups.

Maybe it's time to give yourself back the freedom to self-form beyond the safety zone set and owned by Zuckerberg and co? Mark, your work here is done - the kids have grown up. Let them go.

Posted by David Cushman at 9:35 pm 2 comments: Links to this post

Help break down one of the last silos of the web

One of the least spoken about silos restricting the web is the one locking disabled people out.

No one gets to erect a public building without thinking about access for all – but websites – great and small – seldom dignify disabled folk with the same amount of thought.

Stop and consider how lucky you are for a moment; you the majority who think nothing of reading what’s on the screen, hearing it, seeing it, interacting with it through keyboard, mouse, touchpad, mobile phone, touch screen and more.

For a very large number of people getting information from the web, and engaging in the economic value generation connection brings, cannot be taken for granted.

There’s a disabled person out there right now who could help you solve your current problem, point you at something you need, join you to make something you care about happen. But they can’t because he or she is locked in a silo marked ‘no access’. For every excluded person the web ( all of us) loses an opportunity to be greater than we are. This matters... to you!

FixTheWeb is a charitable attempt to break down that silo – to connect more of us. It’s got backing from key stakeholders in the voluntary sector, support from Stephen Fry and a good stock of volunteers already wading in.

It’s doing great. But it needs to do better. And that’s where you come in.

Sure, come sign up. Offer your dev or design services of course. But fundamentally the short term requirement is cash to drive it to the next level.

So if you or your company has some cash set aside for charitable works, please consider FixTheWeb, right now. If you can’t – please pass on to someone who may be able to help.

“We all expect a few glitches when we go on line, but when it comes to accessibility for disabled and older people, the problem is colossal. Fix the Web is doing something about it in a positive and practical way – I urge you to get involved and help get this problem fixed. This campaign gets to the very heart of the problem – it’s pure genius!”

Disclosure: David Cushman is a Trustee of Citizens Online, the charity leading FixTheWeb. For more details contact the co-ordinator.

Posted by David Cushman at 7:31 am No comments: Links to this post

The risk of reliance on real time I noticed , via the gift of twitter, that JP Rangaswami has been busy nailing it again – this time on the subject of hierarchy.
He was clearly speaking at some event or other – and illuminating the world with his thinking as he so often does (for I knew of his thinking from the tweets being sent from an admiring audience).
Thing is, what he was talking about was what he was shaping and had substantially published on his blog back in January.

Nutshell: Hierarchies are required when the cost of co-ordination is high; in the age of the web they are much lower so we need them much less. Read his original post in full (I recommend it and many other of his posts).

In a pre Twitter age I’d have read JP’s blog post the day it was published. As my flow of information sped up, so I missed it. That’s the risk of reliance on real time. (image courtesy Col_Adamson)
Blogs stand on the asynchronous side of connecting us. We do well to remember that organisations that fit the network best enable both synchronous (together, at the same time) communications alongside asynchronous (not at the same time).
Which re-emphasises the point I made earlier this week: Messages are meant to connect us, not to persuade us.
Connection has value to us both at the moment of need (real time) and at the point of discovery (there awaiting our moment of need).
For example; if I have a fault with my car and I can connect with 5 car mechanics right now, one of them may be able to answer my query. But if they and the 2000 other members of a forum have recorded their answers for later discovery that may offer a wider range of niche answers to niche concerns.
If everyone is connected all the time then real-time wins. But unless and until, then we also need asynchronous.

This perhaps illustrates another fine point – made again in a blog post, by Hugh MacLeod (Gaping Void) that

“Blogging hasn’t changed, you have. What’s happening on the Internet isn’t important; What’s important is that the world knows how you intend to change it. Right here. Right now.”

The point is that a tweet has much less opportunity to become a social object – a thing around which a community of purpose – folk who care about something enough to do something about it – can gravitate.
A blog post – at least one with purpose - stands as its own social object; a thing around which conversation happens; the aggregator of folk who care; the maker of change.
Tweets (and Facebook too) serve very well to point at these social objects – to spread the messages that can connect us. But it is rare that they are the social object itself.
I say rare – not impossible. We have all seen examples: We Love the NHS springs to mind.
However, if nothing else, my miss of JP’s blogpost combined with Hugh’s call to action will do one thing for me; I aim to rebalance my time spent blogging vs time spent tweeting and see what that does for my ability to connect.

By the way this is the 1002nd post on this blog. If I'd been paying more attention we'd have all had a party two posts ago...

Posted by David Cushman at 7:43 am 2 comments: Links to this post I am continually amazed by the number of people who still seem to think 'social media' is all about content and the distribution of messaging.
Their end game is to persuade you, via the gift of influence, to do stuff. This is the exact same model as old school PR and Advertising: Pay us money, we'll persuade folk to do what you want them to do.
Social Media is not a 'do to' medium. It is a 'do with' medium.
Yet few in the persuasion camp will even open the door to allowing their campaign of doing to to be done with the people for whom it is intended. The lip service to peer to peer participation usually paid is simply to use you and I as a channel to distribute.
This is to treat the peer to peer networked environment as if it were simply another broadcast medium - which is to  misunderstand the difference between a network of nodes and a centre-out broadcast mechanic.
The web creates greatest value when it is understood as the best available way for groups (communities of purpose) to self form. Our sharing of messages, perhaps better understood as our expression of metadata, is our way of reaching out to connect with other people who want to solve the same problems we do, right now.
Bringing together people who care about the same things, self forming into groups, is how the energy to make change is generated.
Bring together people who really care about something and they will help you improve it, making it a better fit for themselves. They'll help you make products and services which work better for them, because they matter to them. They'll do with... you.
It's social, its participatory, it's niche, and it's where the purpose of messages (metadata) is to connect us rather than to persuade us.

Email ThisBlogThis!Share to TwitterShare to FacebookShare to Pinterest
Labels: communites of purpose, message, participation, peer-to-peer, social media, The Power of the network, twitter 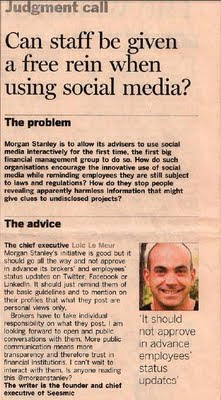 I've been asked to join the Financial Times Judgment Call panel - a group of people who, on occasion, get asked to contribute their judgment/advice on burning business issues of the day.
Those of you who have a subscription to the FT (and it's the one paid-for to which I do subscribe) will be able to read Judgment Call in the Business Life section of the website. 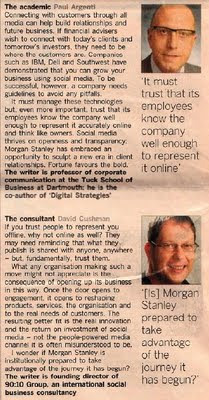 Those who don't could have read this in last Wednesday's paper. If you missed it I have scanned it below. I know - not really meant to - but I'm hoping since it's now almost a week old, and the quality of jpg ain't uber great - no one should be unduly upset (click on the pics for larger images).
The article is about Morgan Stanley's toe-dipping exercise re social media.
Morgan Stanley - like all financial institutions - have quite a heavy set of responsibilities to add to all the usual ones. Their response to this is to check every staff member's tweets before allowing them to hit the web.
Which makes for a stilted 'conversation' to say the least.
But let's not be too harsh. It's a start. And every journey needs one.

Posted by David Cushman at 10:58 am No comments: Links to this post