Two years and seven months after I collared Prime Minister David Cameron on the subject of his position on Twitter ("Too Many Tweets Make a Twat, to quote from his Absolute Radio interview before the last election) he has finally taken the plunge and started his own account.

His opening tweet - for those who have lost the connection in the mists of time - is a reference to that very "Twat" faux pas.


"I'm starting Conference with this new Twitter feed about my role as Conservative Leader. I promise there won't be "too many tweets..."

When I bumped into Cameron in a London Starbucks he took the view that politicians should think before they speak - which makes Twitter risky.


Politicians, he said, needed to think about what they said, before they said it.

He worried that those who tweeted all the time were sharing a stream of consciousness.

I said politicians ought not think too hard before they speak, they should tweet their stream of consciousness. I'd prefer the direct honesty.

For the rest of the original post, (and some interesting issues about the realities of privacy in today's connected world), go here.

By co-incidence I was retelling the story of my chance encounter with the PM at one of the panel sessions of London Social Media Week a couple of week's back. Which has led to some confusion:

While it is perfectly possible that I set a small flame burning in Cameron's mind back in 2010 (the power of John Prescott's ability to disintermediate the media may have had growing resonance post the whole Murdoch melt-down) I cannot claim to be behind this latest sorte into social media. If I had been he'd be following more folk back than a handful of echo-chamber Tory MPs. And he wouldn't have an underscore in his Twitter handle (it's @david_cameron). I mean, have folk there never used an iPhone???

Also I'd have been making his move on to Twitter part of a much larger shift from centre to edge.

Inspired by my new connection, I wrote an Open Letter (with the emphasis on Open) to Mr Cameron after our meeting (and after he'd come to power). Given the 2 year 7 month delay between our Starbucks enounter and his Twitter account, it would be wonderful to think that he'll be acting on the contents of the Open Letter by Christmas... Here's hoping!

Posted by David Cushman at 8:31 am No comments: Links to this post 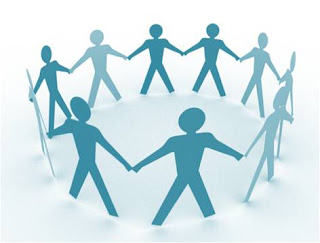 Today - over at 90:10 Group - we've published the sixth post in our series on The 10 Principles of Open Business.

Again, this is not a tactic - it's a design principle:


We've learned through experience that simply buying tools is not enough. Ever heard the expression: All The Gear But No Idea? That's where so many organisations find themselves having been sold on the tech - convinced by slick sales folk that there really is a button you can click to make you 'social'.

Sure, you need the gear. But first, get the idea. I guarantee you'll make better selections of the gear as a result.

Here's an excerpt. For the full post visit 9010Group.com.


"Rather than working against connectedness (usually out of fear), work with it. You’ll be working in the same direction as your teams.
Without our daily connectedness to others our ideas remain un-nurtured and un-tested, our understanding of the realities of the eco-system within which we all live, severely limited.

This eco-system, this market, is not something you can take a snapshot of once a year, it is ever changing, something you are part of and which must be listened and responded to in as close to real time as possible if you are to maintain a best possible fit with its needs.
Connectedness is an essential part of this. Connectedness scales the organisation’s ability to listen, respond and adapt to the market.

But beyond all of this, connectedness humanises a businesses. It allows your customers and other stakeholders to interact with the living, breathing, passionate, caring people on whom your business depends. It takes down the walls."

Posted by David Cushman at 12:30 pm No comments: Links to this post

Judgment Call: Can You Be A Global Business and Idealistic?

Once again I've been asked to contribute to The Financial Times' Judgment Call panel - alongside Harvard Business School's Sebastien S Kresge professor of marketing Rohit Deshpande and the CEO of Polar Mobile Kunal Gupta.
The issue our advice was sought on was: Can you be a global business and idealistic?
This follows from the detention of Google's most senior exec in Brazil when Google refused to take down a YouTube video which allegedly insulted a local politician.

My advice, as regulars here will guess, was that not only should a global business remain idealistic - but that it must.
Here's the full (and only lightly edited for publication) response I supplied:


Organisations have to remain true to their fundamental beliefs - their purpose.

Our connected world demands more than simple customer centricity, it requires customer partnership - and that is driven by belief.

Today's winners are Open Businesses - organisations which use their resources to create networks of people who care about the same things they do and who work with them to achieve shared goals.

This clearly relies on support from outside the org. It's this support, this willingness to participate, that delivers competitive advantage. They participate because they share your beliefs.

That is the bigger picture Google sees - and which no amount of local sabre-rattling is likely to make it relinquish.


This of course speaks to Principle One of the 10 Principles of Open Business - Purpose.
The outing in the FT this morning (October 3, 2012), also marks the first publication in print of the fact of our forthcoming book The 10 Principles of Open Business (see the end of my piece in the pictures accompanying this post). Though I have to say our potential publishers are suggesting that may, in the end, become a sub-heading. Will keep you posted, of course.

Posted by David Cushman at 5:00 pm No comments: Links to this post 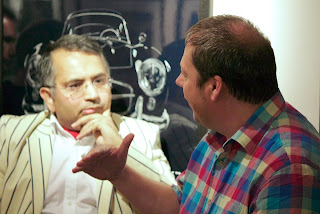 Thanks to everyone who attended, tweeted, retweeted, blogged, liveblogged and storified the two panels I sat on in Social Media Week London for LikeMinds last week.

I opened up introducing the Truth & Trust event on Monday morning and closed by joining the Future of Being Social.

Both were very well attended and shared beyond the room.

The Live Blogs are as follows:
...and there is a Storify here: http://storify.com/gabriellenyc/truth-and-trust-likeminds-smwldn from the Truth and Trust event.

I'm indebted to Andrew Gerrard of Like Minds for pointing all this out to me.

Posted by David Cushman at 3:04 pm No comments: Links to this post