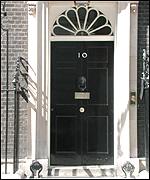 Podcasts and RSS are a given. It's even built on the wordpress blogging platform.

I'd love it to enable comments (rather than have to wait for the allotted moment of interaction with our elected servants). Sadly even the youtube videos and flickr images have comments disabled. That makes the social tools a bit too broadcast (we'll do the talking, you do the listening) for me. Shame.

I bet that level of control was set by someone who doesn't use social media, huh?

And it would be wise to have feeds from rivals if No10 wants to serve a community, rather than its own ends.

I don't expect them to enable crowd-sourced legislation any moment now, either (though I do believe our current political system serves the lowest common denominator in ways that fit the broadcast/industrial world rather than the networked one the new site's tools are attempting to tap into).

Our new site aims to keep you up to date with all of the developments of the PM’s activities through news stories, videos, Flickr images and our Twitter channel.

There are also plenty of interactive features available, including the opportunity to post your video questions directly to the PM, submit e-petitions and take part in webchats with ministers.

It's a sad day when many a media brand finds itself lagging behind Gordon Brown for use of social media, innit?

Posted by David Cushman at 1:14 pm